changing the atmosphere in organisations

You can frequently tell what it is like to work in an organisation, for example by observing how people interact, how they communicate, how offices are arranged & the ambience of the reception area. However, it is not always easy to articulate why you are left with certain impressions which tend to be formed quickly & often subliminally. In his book ‘Blink’, Malcolm Gladwell talks about “rapid cognition …the kind of thinking that happens in a blink of an eye’.

Impressions & atmosphere are by-products of the prevailing management style. Equally, awareness of atmosphere combined with the confidence & capability to maintain or enhance it is a core skill of leaders in today’s complex environments.

Contrast two ends of a spectrum.

At one end lie organisations with negative energy. The working atmosphere might be dulled by a combination of factors: the over-use of rules; drawn-out decision making (or indecision); fragmented activity leading to difficult internal dynamics. 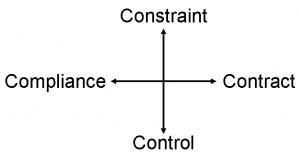 Typically, top management creates strategy which they hand down to staff as a set of Constraints, controls, measures, systems, procedures. Such Systems and structures can lead to an atmosphere of Compliance which you can tell from ‘the smell of the place’ – the look of people, the way you are treated, the way they look at you (or don’t). It is often accompanied by a high-Control management style & relationships that are Contractual, instrumental, guided by policy or negotiation.

As the external environment changes so people are increasingly urged to take the initiative, to co-operate, to learn, to be committed, to have self-confidence, all of which can be difficult in an energy-sapping environment. You can have all the change initiatives, the ‘ra-ra’, but in the end it comes down to me – how do I feel? 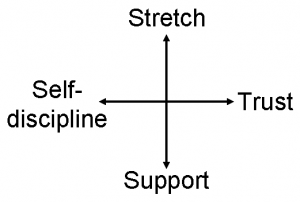 Contrast this with an environment in which top management replaces purely top-down strategic constraints with an exciting & attractive sense of Purpose in which people can feel involved? The targets are still Stretching yet the prevailing attitude is more about Support, working together to achieve rather than being led by reward & sanction. Clear & compelling purpose coupled with mutual support can help replace control with a greater sense of Self-Discipline. The leader & organisation can then place more Trust in people to act in line with the overall vision.

These two working environments are poles apart; what makes the difference?

Has strategic planning in ‘positive energy’ organisations been abandoned? No! Have the controls all gone away? No! Some of the most highly energy-generating organisations clearly have very tight control systems. It’s all in the way management use the tools at their disposal; & it often lies in the small, simple things, for example:

The conditions that describe atmospheres full of positive energy have strong echoes with the principles of complexity science & systems thinking currently occupying increasing air-time as organisations look for fresh ideas to help navigate an ever-evolving environment. As just one example, authors Donald Sull & Kathleen Eisenhardt argue in the Harvard Business Review (see previews: ‘Strategy as simple rules‘ & ‘Simple rules for a complex world‘) that in a complex environment, effective strategy needs to be implemented ‘through Simple Rules’ that are closely monitored rather than tight, top-down control.

These factors also map directly onto the principles behind Engagement (see earlier article on this site). Engagement is a matter of some urgency for many organisations, especially those that are undergoing upheaval & change as firms reorganise to handle the uncertain & emerging dynamics in their markets.

But a change in the atmosphere does not happen overnight & plenty of “ra-ra” will not bring it about. Changes happen locally & then spread out. They happen through teams & individuals who are led appropriately & who feel involved, engaged & empowered.

Local changes, properly leveraged, act like a virus on the prevailing atmosphere. They really can kick-start the enterprise-wide change – the atmosphere – that positively influences customers, clients, suppliers, staff & the wider market.

The late & highly respected management academic & consultant, Professor Sumantra Ghoshal, used to write & speak eloquently about what he called the ‘smell of the workplace’ & the impact it has on the performance of people who work there. He used to compare his experiences working at the INSEAD Business School in Fontainebleau, France – with the uplifting atmosphere of the forest in Spring – with an annual return to Kolkata, India, to visit family during the oppressive heat of July. Here is a short, grainy, 8 minute YouTube video of him recounting the metaphor at the Worked Economic Forum. What he articulated then still holds good today & echoes the themes in this article.

Being aware of the atmosphere of the place is an early step in doing something about maintaining, enhancing & improving it.