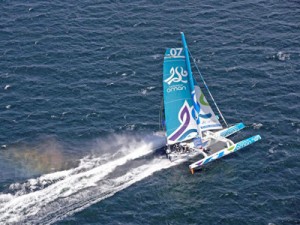 By contrast, it was a full 8 days later that some of the closely fought IRC Two competitors crossed the finish-line – within 25 minutes of each other!

While the trimaran completed the circuit without being caught by the storms, many of the other yachts were beset by Storm Force 9 gales off the Shetland Islands, an area know to host some of the roughest waters around the coast.

There are going to be many tales to tell from the race, long into the winder months. Other records were broken while some boats were forced to retire due to failed equipment. The weather took its toll, for example sails had come under such pressure that they split & were irreparable on the high seas.

One of the winning yachts said of their time off the Shetland Islands that it took a long debate to decide the best strategy as two fierce storms approached & hit the area. The delay nearly cost them their race.

The concept of anticipating & dealing with storms at sea is a good analogy for the effective management of change & transition.

the costs of leaving it too late

Organisations often seek support when the need is greatest & most apparent – at the centre of the storm or at best when it is just the other side of the door. At this stage the need is only too apparent. A team faces missing critical time deadlines. It could be under pressure to perform or faces challenging inter-personal dynamics between members for example. Only at times like these are people aware that they need to act.

What is the cost of leaving it until the ‘storm’ has all but hit?

Costs are hard to calculate but not hard to imagine. For example, energies may become dissipated through discord between team members, key decisions may get ducked, deferred or not followed through. It may be that cliques form, take entrenched positions & resist new ideas. Ultimately this will have a ‘cost’, either direct or through under-performance, reduced productivity & lost revenue. All this is before you take into account the opportunity. cost of tying up internal & external resources needed to sort out the problems.

Many of these late-to-appear problems result from unproductive individual or collective behaviour even if this often starts with the best of intentions. For example, in the absence of good preparation it can be tempting to reassert behaviours that have been successful in past crises & so not take into account that new situations may call for new approaches. Equally, a threat to peoples’ existing positions may cause resistance & result in lower levels of cooperation.

Then there is the impact of culture. Peter Drucker, management guru, is quoted as saying: ‘Culture eats strategy for breakfast’. The direction is clear but unless it takes account of culture it may be badly undermined. Organisation’s leaders need to take into account the impact of behaviour & the pressure to conform – the way ‘we (like to) do things round here’.

Underlying culture can strongly influence the ways we react to situations. There are legions of anecdotes to illustrate how culture (re)asserts itself as well as the impact it has on commercial decisions, especially in merger situations.

As an example of the power of culture, Shell experimented with a fresh way to restructure & organise a new blending plant. All went smoothly & everyone involved was energised by the new, shared ways of doing things. That was until influential members of the team responsible for steering the early successes were promoted to positions of greater responsibility and replaced by people who did not share the same history or motivation. Gradually the positive behaviours upheld during the early transition started to be replaced by ‘traditional’ hierarchies & less productive ways of working – just the behaviours they had so successfully escaped.

‘70% of transformation efforts fail to deliver on expectations’

The 70% statistic comes from research by McKinsey & others & has enjoyed a high profile1. The research also reaffirmed that a good proportion of failure is attributed to culture & behaviour, the often overlooked yet critical factors that make the difference. Whatever you think the statistic (& according to a Guinness advertisement, 84.375% of all statistics are made up!) it cannot hide an important principle; actions taken in good time can improve results.

As one example, a telecoms client faced difficulties in the relationship between their sales & finance departments. The salespeople would often be a long way down the sales cycle when the customer raised the question of support for financing the purchase. The finance department was called in & although willing to help they frequently could not obtain export credit guarantees & other solutions as quickly as the customer needed them. Our role was to help build relationships between sales & finance to address just this problem. Part of the solution was to bring both parties together much earlier in the sales process, when there was time to address these important but sometimes overlooked aspects.

Like the value of truly effective passage planning for what was an exhausting & relentless ocean sailing race, hindsight in the world of work also points up actions that teams could have taken to anticipate & head-off behaviours that could so easily throw their competitive positions off-course.

However it is done – by leaders, internal specialists, external consultants or a combination of all three – early anticipation of hurdles & barriers that could arise from cultural differences, limiting beliefs & actual behaviours can lead to improved results, results that are achieved in a smoother, more productive, less costly – & faster – way.

1 For example see the article ‘Cracking the code of change’ by Michael Beer & Nitin Nohria. http://hbr.org/2000/05/cracking-the-code-of-change/ar/1